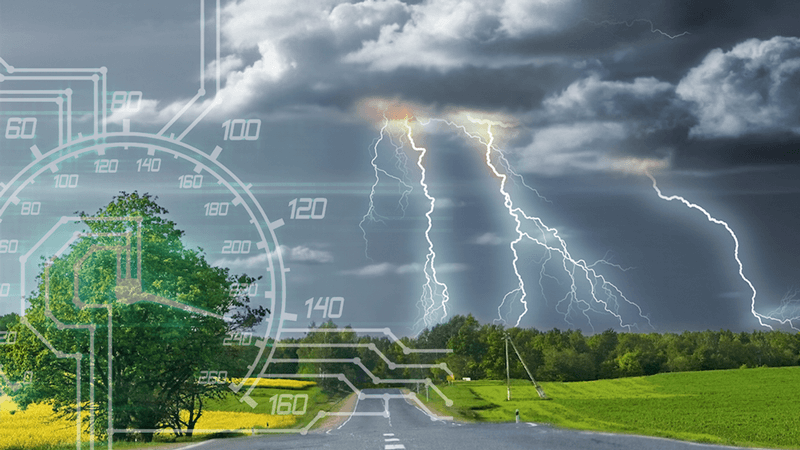 Snow storms, heavy rain, and fog clouds hamper commuters daily as they traverse throughout the United States. Adverse weather conditions challenge even the most experienced drivers. So how well can a driverless vehicle navigate bad weather?

The current answer is “not very well”.

In fact, at this very moment, leaders in self-driving technology are focused on perhaps their most challenging task: making driverless cars capable of handling poor weather and road conditions.

WaveSense, a Boston start-up company, claims their sophisticated radar system provides autonomous vehicles with a way to drive through the elements.

The WaveSense radar relies on a cluster of sensors bolted under the chassis, similar to a skid plate. The radar sensors are able to probe 10 feet below the ground and then develop a sub-surface map of the roadway.

WaveSense asserts their advanced radar system is sensitive enough to identify roots and rocks below ground, as well as other vehicles traveling along the same street.

So how exactly is this radar helpful in getting you to work when a rainstorm is flooding the roads? Or when that unexpected blizzard blows across the boulevard?

WaveSense explains that using ground-penetrating radar creates a roadmap that is static and unchanging even when the weather does change. Basically, your driverless car will follow the practical guideposts of underground tree roots and water sources that remain the same whether the skies are cloudy or sunny.

Speed is also not an issue for this new radar system since it will work effectively even at 65 miles per hour.

Apparently others in the automotive industry have a lot of faith in the solution WaveSense developed. In 2018, the company raised $3 Million in seed money and signed two contracts, with unnamed customers, for advanced testing of the self-driving vehicle’s radar technology.

In reality, driverless cars may rely even more on these types of advanced features since there is not a human piloting the automobile.

The interactive spider web of devices used by self-driving autos, includes: cameras, sensors, GPS, and lidar technology (light detection and ranging). For the most part, these applications run smoothly and effectively until poor weather conditions arise.

For example, snow and rain fracture the light created by lidar lasers. Cameras are not much help in foggy or snowy conditions. GPS is known to buffer when the weather is poor and radar can detect, but not define, what is in the roadway.

In order for self-driving cars to work well and be a worthwhile investment then a solution is needed. After all, people want reliable transportation that works even when the weather report isn’t sunny and 70 degrees.

To resolve this issue, industry leaders are investing a lot of money in developing autonomous vehicle technology that “thinks” logically. This type of programming is known as “sensor fusion”.

Waymo, a self-driving technology subsidiary of Alphabet Inc., has pushed this initiative the furthest so far. In January 2017, Waymo revealed the creation of their very own sensor suite. The technology group built a complete sensor set to allow for the seamless integration between each component.

In addition, Waymo improved upon the standard lidar laser by producing two different versions. One lidar is for close range and the other lidar is for further distances.

All of these sensor innovations are intended to improve the overall performance of driverless automobiles in both good and bad weather.

What’s the Forecast for Driverless Cars?

Industry pros estimate it will take another two years before any company can develop equipment that consistently handles tough road conditions. However, unforeseen setbacks can always be just around the corner.

Right now most self-driving technology companies are focused on more immediate concerns such as enhancements in safety capabilities.

After all, both consumer and government confidence in driverless cars could be the last roadblock to an estimated $7 Trillion business.

In the meantime, WaveSense is taking its underground radar to the Boston area this winter for more road tests.

A harsh East Coast winter may be the best assessment for the future of driverless vehicles.