For many decades it’s been commonplace to share with auto insurers both your driver’s license number and your social security number. After all, insurance companies review your driving record and credit score before issuing coverage. Typically a driver with a low credit score will pay more in premiums, even if their driving record is flawless.

Over the years, different state and federal legislators have questioned this practice. However, insurers contend a low credit score signals a higher risk applicant and one that is more likely to file auto claims as well.

Is it fair for car insurance companies to rely on credit scores as part of their underwriting matrix? 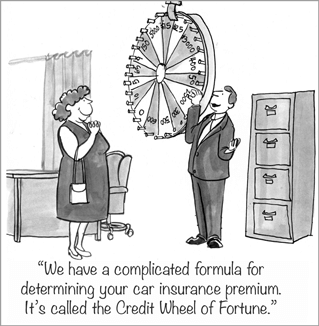 Are poor drivers being punished for not having better financial resources?

Bill H.R. 1756 also has strict language clearly banning organizations, such as insurance companies, from the use of consumer information for car insurance ratings or underwriting purposes.

Federal lawmakers have travelled this road before. In fact, a decade ago House Financial Services Chairwoman Maxine Waters (D-Calif.) proposed a bill similar to H.R. 1756 which ultimately failed.

Prior to unveiling H.R. 1756, Rep. Tlaib shared her concerns during one of the Financial Services Committee’s first major 2019 hearings. During the meeting, the credit bureau executives in attendance could not explain how an auto insurance applicant’s credit score is actually helpful in determining a driver’s risk.

Surprisingly, two of the CEO’s actually recommended Rep. Tlaib continue to look into this matter and then pledged their assistance.

Craig Boundy, CEO of Experian North America, said this was a complicated issue that was worthy of further review. Apparently a few dozen of Tlaib’s fellow Representatives agree.

To gain sponsorship, Rep. Tlaib wrote a letter asking her colleagues to join her in helping all consumers fight against this exploitative insurance procedure.

It’s worth noting, the bill is currently backed by Democrats from 15 different states. No Representatives have signed on so far.

Even though most insurers expect the bill to die before becoming law, the auto insurance industry does remain vigilant. The reason is because many within the insurance arena predict the proposed law may end-up as an amendment to the larger credit report overhaul Chairwoman Waters is currently drafting.

Rep. Tlaib may have decided to take up this cause since she represents an area of Detroit widely known for high car insurance premiums. Furthermore, various published studies lists the state of Michigan as having the 2nd highest auto coverage within the United States. For example, Michigan drivers pay an average of $133 per month or $1,600 per year for their auto policies.

In sharp contrast, the majority of U.S. states pay an average of $64.27 per month or an average of $770.42 per year. This means Michigan drivers pay almost double what their fellow Americans pay.

Tlaib believes this discrepancy is only widened when you factor in rates for individuals with poor credit scores.

“It’s a new form of red-lining. If you have a lower credit score, you’re low-income, if you’re financially burdened, does that make you less of a safe driver? No,” Tlaib said. “It’s just unfair. Most of my neighbors and residents, they don’t have access to credit, and they shouldn’t be punished for being poor.”

Interestingly enough, a 2015 Consumer Reports study confirms what Rep. Tlaib hypothesizes. The analysis found a single Michigan adult driver with “good” credit and a spotless driving record was charged up to $526 more on average than their peers with an “excellent” score.

Critics of Tlaib’s bill say Michigan’s car insurance is so costly because of Michigan’s state requirement that drivers purchase unlimited lifetime medical benefits. Nothing to do with credit scores.

What Else Do Insurance Insiders Say?

Opponents of H.R. 1756 say the proposed law is well-meaning but misguided. Many have voiced their objections by saying the bill would negatively impact underwriting and lead to possible premium increases for existing policyholders.

Auto insurance associations have also claimed that Congress is overstepping their boundaries by getting involved in a state regulated industry. This may be true but Congress does have the authority to revise general credit reporting practices.

So what happens if H.R. 1756 doesn’t go the distance? Might state lawmakers take up this same fight?

Three states have already done so: California, Hawaii, and Massachusetts.

What will be the final outcome? We’ll have to stay tuned to the ongoing debate and track H.R. 1756 as it meanders along the Congressional system.

The high cost of auto insurance is a plague negatively impacting U.S. drivers throughout the nation. So it’s not surprising…