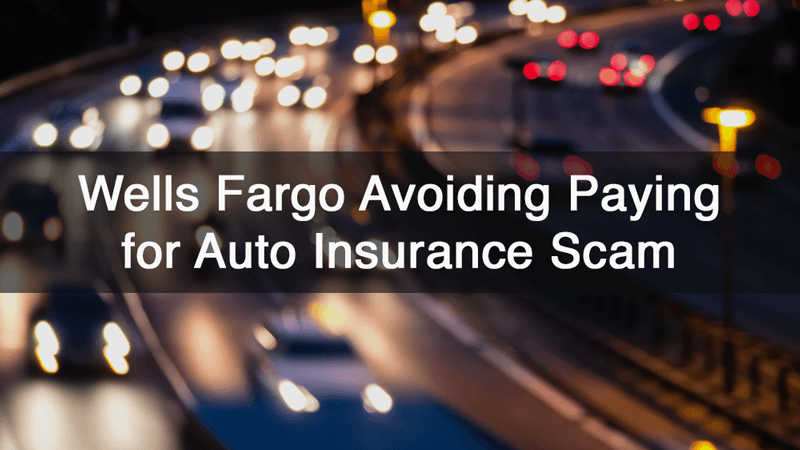 Wells Fargo & Co. is trying to put the brakes on refunds to more than 600,000 auto loan customers harmed by the bank’s much publicized insurance scam.

To date, no payments have been made to any of the affected customers.

In fact, Wells Fargo argued in court that the focus of the repayments should be limited to the years 2005 thru 2016. This timeframe would exclude the first three years of the auto insurance scam, previously noted as occurring between 2002 and 2016.

In April 2018, the Consumer Financial Protection Bureau (CFPB) agreed to let the bank limit its payouts to the lesser time frame of 2005-2016.

On the other hand, the Comptroller of the Currency (OCC) did not establish any specific time frame for payouts. Yet the OCC did comment in October that they were uncomfortable with Wells Fargo’s repayment plan.

Wells Fargo’s strong resistance to refunding for all the years of the bank’s misdeeds is in sharp contrast to their previous statements.

In 2017, the bank announced they would refund customers $80 million. That did not occur and they have yet to take any proactive steps towards repayment.

The questions right now: how will the bank’s lack of action play in front of federal regulators? How will the bank’s inaction be received by the general public (and potential customers), as well as its investors?

Finally, we have to wonder when Wells Fargo will finally do right by their previous customers and move forward with a solid resolution.

According to court documents, Wells Fargo joined National General Insurance in a concerted effort to milk millions of dollars from the bank’s auto loan customers. It was a devious conspiracy continued unobstructed for 14 years.

Once a Wells Fargo customer established an auto loan, the bank’s Dealer Services Unit would pass the customer’s private information to National General Insurance. The insurance carrier would then issue the client a Collateral Protection Insurance (CPI) policy and automatically deduct the CPI premium from the customer’s bank account.

All of these actions were taken without contacting the customer to confirm they wanted the auto insurance and without authorization to debit the customer’s bank account.

Plus, the organizations added interest to the scam auto insurance policies and automatically deducted that fake interest charge from the customer’s bank account as well.

Over the years customers recognized these odd charges and notified Wells Fargo of their concerns. Once Wells Fargo was made aware of the unnecessary insurance plan, the bank was supposed to cancel the policy and credit the customer for the charges. That did not happen and the insurance remained in place.

In fact, customers allege they contacted Wells Fargo numerous times regarding this matter and their complaints were always ignored. Month after month unauthorized fees were taken from Wells Fargo auto customer bank accounts.

In the worst case scenario, 25,000 Wells Fargo patrons had their vehicles wrongfully repossessed as a direct result of this auto insurance conspiracy.

Of course, these fraudulent repossessions damaged each driver’s credit rating too.

Many individuals are still dealing with the repercussions from Wells Fargo’s dirty deeds.

Since August 2017, Wells Fargo and National General Insurance have been in the midst of a class action lawsuit filed on behalf of the wronged customers.

The drivers are using this lawsuit to secure additional damages beyond what federal regulators have proposed.

The lawsuit is working its way through the Northern California court system, under case No. 17-04324.

The final terms of the federal remediation plan could be impacted by the outcome of this private litigation.

Around the same time this auto insurance plot came to light, Wells Fargo was already in the midst of an account fraud scandal.

Bank employees created millions of fake bank accounts on behalf of Wells Fargo clients. This was done without the patron’s knowledge and in an effort to increase the bank’s sales numbers.

The Wells Fargo account fiasco cost the institution $185 million in regulatory penalties. They also settled a private lawsuit with their wronged clients by paying $142 million.

In October 2016, John Stumpf stepped down from his position as Chief Executive Officer (CEO) of Wells Fargo amidst the account humiliation.

updated - Nov 14, 2019 In light of the deadly school shooting in Parkland, Florida, there has been a growing…

Since 2012 Oregonians have faced a steady uptick in automobile thefts but little justice for the victims. In fact, the…